The Art of Study Groups 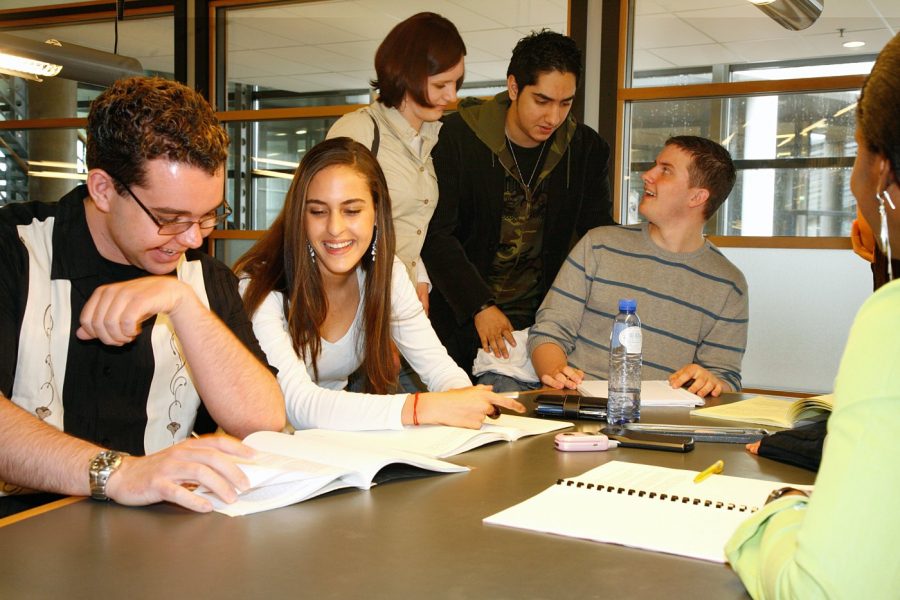 Whether you’re an IB student or still in the wonderful years of the pre-IB, assignments will play a significant role in your high school career. While these assessments may seem like an endless chore of source analysis tests after next in your history class or a constant influx of maths homework, there is one way to combat this monotonous struggle: study groups. I will be outlining the numerous benefits of the study group and the reasons for its successes and perhaps I will convince you to give it a try as well.

I’d like to especially emphasize its impact on one monster within our own minds called procrastination. This phenomenon seems to strike every student at the most crucial time of the assignment, but it can finally be vanquished with the use of study groups. While many might believe that studying in a group might worsen procrastination, as each member could distract the other easily with just their presence. While this may be true in certain cases, there are more ways in which study groups can beat procrastination. Due to the fact that study groups meet at specific times and each student knows they must pull their weight during the session (even if it’s just understanding the material), they’re more likely to work harder than usual. It’s the group mentality that plays the biggest role; If you know that another student is relying on you, you will do whatever you can to get the job done. This leaves little time for even the thought of procrastination. However, for this benefit to be optimized, it is key for at least one student to assume the role of the ‘responsible one’ in order to get the group to move along in worst-case scenarios.

Another benefit of study groups is that they present you with new study methods. Every individual has their own study method and there is no harm that comes from sharing. Sometimes new methods can even come up by working together. For example, one very memorable moment from a study group session was when I was reciting elements from the periodic table and my friend began creating a song to make it easier for us to memorize. It’s with this sharing of methods that everyone can showcase their own talents and allow students to benefit from the talent of their group members.

Finally, you can cover so much more material in a shorter time interval than when you’re working alone. This is the case since in a study group you can quickly ask questions to others who understand the material and you don’t lose any time struggling over the question on your own. The time spent studying will also feel much shorter with the presence of a study group with peers since it will be more enjoyable than puzzling over questions and feeling more and more frustrated as time goes by.

I relished the opportunity to interview Dana, a senior who regularly participates and forms study groups for her assignments. She listed a number of classes she uses study groups for such as biology, history, mathematics, and occasionally English. Dana mentioned that it was especially crucial in subjects such as biology or history where she used study groups for nearly every test or big essay on the subject. This seemed to be important in these classes as there was just so much content, and she believed that it helped her fill gaps in her knowledge.

When asked about some tips for students willing to form study groups, Dana stated, “You shouldn’t necessarily choose your friends. It is much more efficient and productive to choose people in your classes that you can focus and stay on topic with”.

Finally, she concluded the interview with more insight “While working in study groups is efficient, I’d say that’s not the only way to study. Remember that teachers and other people can help you just as much as them. Listen and ask questions in class and if there is any major confusion you should always go back to your teacher. Don’t forget, they’re the ones grading you. Also, focus on what’s most important in that class such as major events in history or key concepts (learning objectives) in Biology.“

Becton Loveless, author of the article “Using Study Groups” from the Student Corner wrote a list of ways to create the most effective study group. A group with 4-6 peers that you are certain you can focus on (and including at least one person that is very good at forcing you to focus) with a common goal of earning good grades is the best starting point. From there it is most efficient to study in areas such as the library, where there is little to no distractions and studying there for 2-3 hours since longer sessions lessen the sense of urgency of the situation and can lead to more socialization than actual work being done.

Overall, the benefits of study groups include less procrastination, new study methods, and more material being covered in a short time interval. If you’re interested in joining or starting a study group, don’t be afraid to go around asking a couple of friends to meet over the weekend or to work together with the tutors from Peer Tutoring Network, who are always willing to lend a hand.