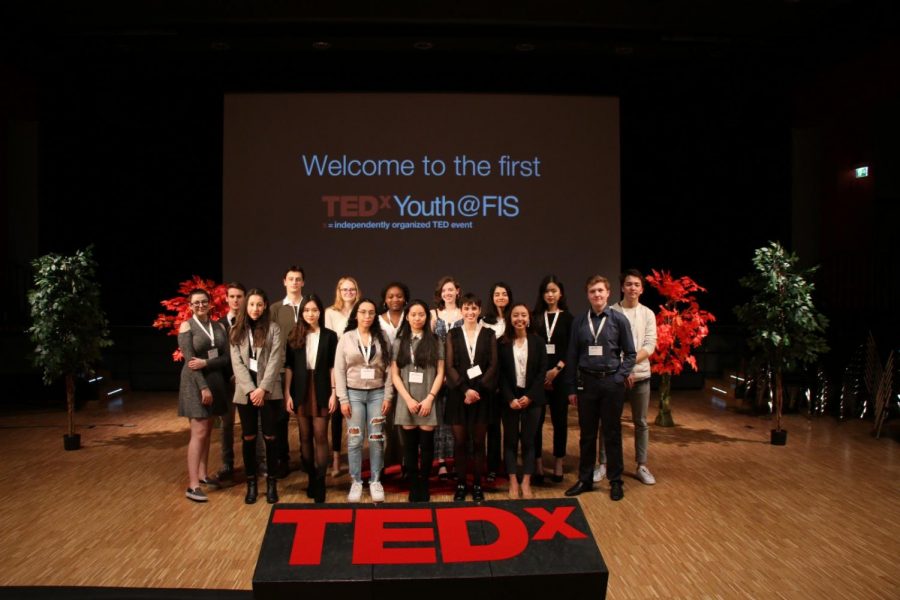 On March 1st, FIS hosted its first TEDx Youth event at school, consisting of 8 speakers who are students at FIS. Lead organizer Mr. Michael McDowell, along with a group of seniors, led by student leader organizer Hannah Youm and student co-organizer Claire Sherwood, organized this event and was immensely successful in filling 100 people in the auditorium.

Speakers who had auditioned and been working since last Summer, gave speeches dedicated to their interest or issue that they believed should be addressed. Speeches ranged from building confidence, journalism industry, the reality of being a third culture kid all the way to environmental issues, antibiotic issues and raising awareness for women in STEM.

8 speakers in total took part in this event: Claire Shannon-Vermillion, Ross Cunningham, Mihiro Shimano, Reyna Lim, Shai Hirschl, Siddhi Sharma, Kitty Cao and Linnea Hummer. One of the speakers, Ross Cunningham in 12th grade, said the TEDx talk “helped me learn how to better communicate a message, how to express a message with emotion and got to know people in the process”

Many of the audience included teachers from a variety of faculty areas, as well as parents, siblings and many student peers. Many came to support friends but recognized the importance of these talks and how it can impact our world today or an individual to an extent. Monique Charlifue, a student in 12th Grade commented on the TEDx talk after the event. “Knowing that it was organized by students, it was an excellent and unique experience to attend” she said.

Dr Fochtman, head of FIS, commended the entire team after the event, especially as he had organized and participated as well in TED events previously. Speakers and organizers also were commended by many teachers and peers that had attended the event, even the week after, in person.

Overall, the TEDx Youth@FIS was a successful event and an enjoyable, yet thought-provoking night for many in the audience. The organizers are looking to pass down this project next year to upcoming seniors to hopefully carry on this event in the future with new speakers and new ideas and issues that they would like to address.

About TED
TED is a nonprofit organization devoted to Ideas Worth Spreading, usually in the form of short, powerful talks (18 minutes or fewer) delivered by today’s leading thinkers and doers. Many of these talks are given at TED’s annual conference in Vancouver, British Columbia, and made available, free, on TED.com. TED speakers have included Bill Gates, Jane Goodall, Elizabeth Gilbert, Sir Richard Branson, Nandan Nilekani, Philippe Starck, Ngozi Okonjo-Iweala, Sal Khan and Daniel Kahneman.

TED’s open and free initiatives for spreading ideas include TED.com, where new TED Talk videos are posted daily; the TED Translators Program, which provides subtitles and interactive transcripts as well as translations from thousands of volunteers worldwide; the educational initiative TED-Ed; the annual million-dollar TED Prize, which funds exceptional individuals with a “wish,” or idea, to create change in the world; TEDx, which provides licenses to thousands of individuals and groups who host local, self-organized TED-style events around the world; and the TED Fellows program, which selects innovators from around the globe to amplify the impact of their remarkable projects and activities.