Easter Eggs in Rick and Morty 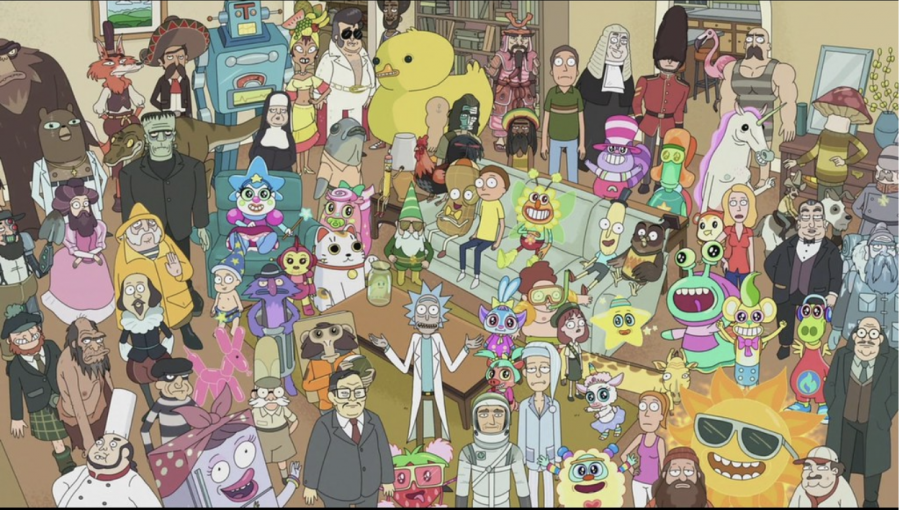 With the release of Rick and Morty Season 4, which according to Justin Roiland, the show’s creator, is going to be the best and longest season so far, I wanted to go over some of the best and obviously not well-known easter eggs that can be found in older episodes. Easter eggs are always fun to find and Justin Roiland is well-known for his affinity for hiding things in his shows. There may be spoilers to the show below, so if you have not yet finished the 3 seasons and are planning to do so, I would highly advise you to not continue reading.

1) The Parasites from the S2E4 episode “Total Rickall”

In Episode 4 of Season 2, a hoard of self-replicating parasites gains a hold in the Smith household. These parasites convince their host that they have been part of the family by invading their brains and creating new memories of them in their host. This convinces the host that they know each other, allowing the parasites to create more new memories, fuelling their replication. This whole episode consists of the family’s adventure with the parasites, and eventually, thanks to Rick, them figuring out the truth about the situation and exterminating the parasites. In this episode, Rick acts confused as to how the parasites managed to enter the house, but there is a hidden moment where it is shown that Rick himself brings the first parasite home. Just two episodes before, Rick is seen carrying home green geodes with something pink attached to one of them. This turns out to be the parasite egg that is allowed to grow in the house and starts the panic after Rick leaves the geodes in the kitchen

2) The connection between Rick and Morty and Gravity Falls

The creators of Rick and Morty and Gravity Falls, two of the most famous supernatural animated series, have been quite vocal about their friendship. This has obviously lead to some common easter eggs hidden in both their shows. The most famous and significant one is the travel of items from one show to another. In the Gravity Falls episode “Society of the Blind Eye” Gruncle Stan is seen losing some suspiciously specific items to the portal’s attraction, namely a pen with a red cap, a notebook, and a mug with a clear “?” on it. These items seem to be lost, though in episode “Close Rick-Counters of the Rick Kind” these items can be seen flying out of a portal in the background that Rick opened to confuse the intergalactic police. This further hints at the friendship between Roiland and Hirsch. Who knows, there may be more easter eggs that span across two shows to be found.

Rick’s bedroom is only shown once in the entire first 3 seasons of the show, in the end-credit scene of the episode “Close Rick-Counters of the Rick Kind”. It seems like a lot of thought has been put into constructing this wall and that it isn’t just a trivial part of the episode. The wall shows all adventures that Rick and Morty have been on so far in the show, with presumably Rick having drawn connections between some of them. It seems like Rick has been devising a conspiracy theory that has not been revealed yet, using the classic conspiracy theory strings to draw connections between what seems like random things, such as Mr. Meeseeks and Aberdolf Lincler, which is only revealed the episode after. Who knows if this conspiracy theory will ever see the light of day. The coming episodes in Season 4 would be a perfect opportunity for Roiland to do so.

4) Evil Morty may be smarter than you think

Evil Morty is one of the main characters of Season 3 and has been one of the main plot points over the last couple of episodes of the season. C-137 Rick and Morty, the duo that we all know and love, doesn’t live in dimension C-137 anymore. They jumped portals a couple of times due to some world-ending dísasters that they may have caused, forcing them to leave in order to stay alive, eventually even causing even the smartest people in the show, the Citadel’s Council of Ricks, to lose track of them. However, Evil Rick hints about knowing their location at the beginning of “The Ricklantis Mixup”, showing the audience that he is one step ahead of the Council of Ricks, foreshadowing his later attempt to destroy it.

5) Episode titles have a meaning

Most shows’ episode titles simply reflect the plot of their respective episodes, though, as you may have noticed, Rick and Morty are a bit special. Each of their episode titles not only hints as to what may happen during the episode but is also a pop-culture reference to an episode from another show. There are countless examples, but these are just a few

Overall, there may be more hidden easter eggs that can be found across the 3 seasons. So go enjoy the show and find some of them all by yourself!