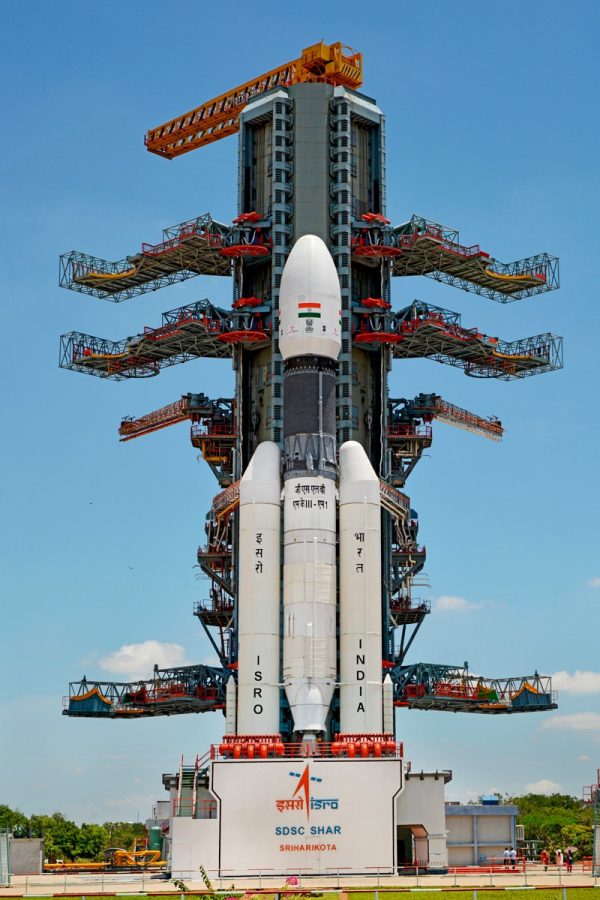 The Chandrayaan 2 before launch

For the first time in Indian history, the Indian Space Research Organization (ISRO) was about to reach heights of glory in lunar space research. This was their first attempt at sending a Lunar Lander into space, in hopes of it landing on the moon.

The Chandrayaan 2 (the name of ISRO’s second space mission) consisted of a lunar orbiter, the Vikram lander, and the Pragyan lunar rover. It was launched from the Satish Dhawan Space Center in Sriharikota, India aboard a Geosynchronous Satellite Launch Vehicle (GSLV) on the 22nd of July, 2019. The GSLV was the rocket that served as a vehicle to the orbiter, lander, and rover. It took these 3 research devices into orbit, at which point it released each of them. ISRO themselves designed this rocket, building it to a size of 49 meters tall, with a lift-off mass of 45 metric tons.

The lunar orbiter is 3.2 by 5.8 by 2.2 meters in dimensions and has a dry mass of 682 kilograms. The dry mass of a spacecraft is the mass excluding any passengers, cargo or fuel – which often equates to a significant percentage of the total mass. Furthermore, it’s capacity for power generation is 100W. Its mission of orbiting the moon will last ideally for the next 7 to 7.5 years. As of the 2nd of September, the orbiter began orbiting the moon at an altitude of 100 kilometers on a polar orbit. A polar orbit is a satellite orbit that moves over polar regions of a planet. In this case, the moon.

The Vikram lander had dimensions of 2.54 by 2 by 1.2 meters, a dry mass of 626 kilograms, and a power generation capability of 650 W. It’s own mission of exploring the moon and sending camera footage back to headquarters was expected to last for a maximum of 14 days, which is one lunar day. The reason it was expected to last this long, is because it would have been unable to survive the lunar nights.

Chandrayaan’s Pragyaan rover had a power capacity of 50 W and dimensions of 0.9 by 0.75 by 0.85 meters. Furthermore, it’s travel speed is 1 centimeter per second, and like the Vikram lander, its own mission duration was also one lunar day, i.e. 14 earth days.

The Chandrayaan 2 reached lunar orbit on the 19th of August, one day earlier than expected. After the lunar orbiter had commenced its orbit, the Pragyaan rover separated from the other components of the Chandrayaan 2 on the 7th of September. Unfortunately, the rover’s communications with ISRO headquarters were disrupted, preventing its deployment and exploration of the moon.

Like the rover, the Vikram lander also separated from the Chandrayaan on the 7th of September and was scheduled to land on the moon at around 1:50 A.M., Indian Standard Time (IST). Despite everything running well, at a distance from just 2.1 kilometers from the moon, the trajectory of the lander began to deviate and communication was lost. This suggested a potential crash or disruption. The Vikram lander’s final velocity was 58 meters per second.

The initial speculations revolving the crashing of the rover were confirmed by the chairman of ISRO, Kailasavadivoo Sivan, commonly referred to as K. Sivan. The location of the lander was found, and Sivan claimed: “it must have been a hard landing”.

Although the missions of the Vikram lander and Pragyaan rover have failed, the orbiter’s mission is successful so far and is predicted to complete its 7-year mission to study the moon. Given that ISRO was so close on their first attempt, they are very hopeful for their upcoming research, development, and potential launches in the future. In the words of India’s Prime Minister Narendra Modi, “We remain hopeful and will continue working hard on our space program. They’ve given their best and have always made India proud. These are moments to be courageous, and courageous we will be!”